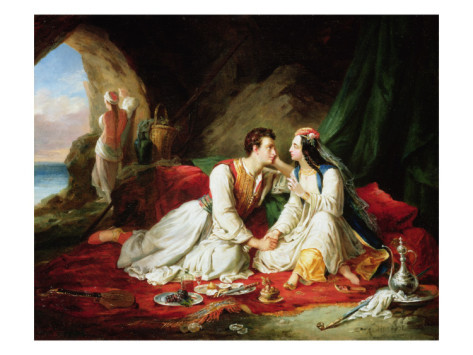 ‘Romanticism’ – the word sounds kind of, well, romantic, right? According to Wikipedia, Romanticism was an “artistic, literary, musical and intellectual movement that originated in Europe toward the end of the 18th century” whose primary focus was on human emotion and human individualism. So why is this article titled ‘unrealistic romanticism’? Because when the concepts of Romanticism moved from the painter’s brush and composer’s pen into our real life expectations, the impact not only changed how we approach relationships and marriage, but might not have changed them for the better.

According to theweek.com, marriage originated as a leverage tool – marrying off daughters to gain property or power – and the bride had little say in who was chosen to be her husband. Religious marriages came into play in the 5th century after the fall of Rome, when the church took over and created the idea of a ‘holy union’ between man and woman, and marriages were performed as a religious ‘rite’ like baptism. Public weddings officiated by a priest didn’t appear until the 16th century. And what about love? Love was not considered a factor in marriage; marriage was too serious to be based on something as flighty as the emotion of love.

As Romanticism caught on, intense emotion rather than logic, procreation, or expansion of wealth and property became the reason for getting hitched. The ideas of a ‘soulmate’ and living ‘happily ever after’ came out of this era. Fast forward to today, and marrying for any reason other than an intense overwhelming emotional response to someone is considered ‘sad’ or as ‘settling’ by most of us in western society. We want the fairy tale – the relationship that overcame all odds – the undying love and affection – the ‘perfect’ union. Let me repeat myself, unrealistic romanticism.

And where has that gotten us? Broken homes, multiple marriages (and divorces), single-parent households, and scads of lonely ‘singles’ on an eternal search for that elusive partner that they never seem to find. If the slew of dating sites and apps are any indication, there are plenty of single people to choose from, so what gives?

According to philosopher and author, Alain de Botton, the unrealistic romanticism that we insist upon in our a partner and in our long-term relationships is our downfall. In short, we’re guaranteed to fail. Why? He discusses many reasons, but two that most stand out to me are our insistence that love be accompanied by intense emotion (or as it is commonly referred to today, ‘chemistry”) and our belief that if our partner points out our shortcomings or our bad/rude behaviors, or even suggests that he/she isn’t happy with most everything about us (because we must be perfect in their eyes), then it’s not ‘true’ love and we should find someone else. De Botton explains in great detail and in a very engaging way, how twisted all of these ideas are and how nearly impossible it makes the goal of actually living happily ever after. He suggests we move into a new era – an era of ‘post-romantic love’.

Personally, I think he may be right.

If you are interested in diving deeper into how romanticism is messing up romance, let me suggest the following Alain de Botton videos: click here if you want it encapsulated in five minutes; click here if you enjoy an interesting lecture that dives a bit deeper.

Please leave your comments below. I’d love to read your perspective!